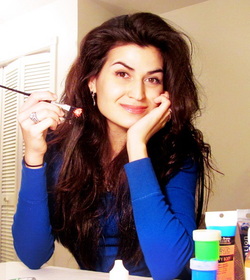 Biography
Nazaretyan Irine﻿. 27 years old.
The artist Irine Nazaretyan  was born and grew up in Moscow, Russia.
After graduating from high school she went to the "Moscow State Textile University named after A.N. Kosygin"
(current name of the University - "Moscow State University of Design and Technologies").
The most interesting and inspiring direction for Irine was textile design for clothing and accessories.
Her prom theme for diploma was - Women's silk scarves,after presentation all of works were selected by Russian textile factory for production.
Irine had an internship and work in Italy, with textile fashion houses, such as "IDEA S.R.L.", "Mario Sirtori".
She has actively participated in the creation of sketches for exclusive interior textiles.
Irine was always fascinated by working with fabrics and wanted to turn textiles in to much more important meaning, than just a material for decoration. She wanted to turn the fabric into the Art. Having mastered the technique of batik which came centuries ago from Asia, Irine applied her own technique and style, and actively engaged in the creation of silk paintings, using silk instead of canvas.
In 2010, Irine married to the architect from Armenia and moved to live with her husband.
While living in Armenia, a country with a rich culture known for its artisans, she began to learn the art of jewelry and soon she released her own jewelry collection of precious metals with hand painted enamel.
In 2013, together with her husband, Irine immigrated to the United States, where she continues her artistic career in Silk Art & Jewelry. ​